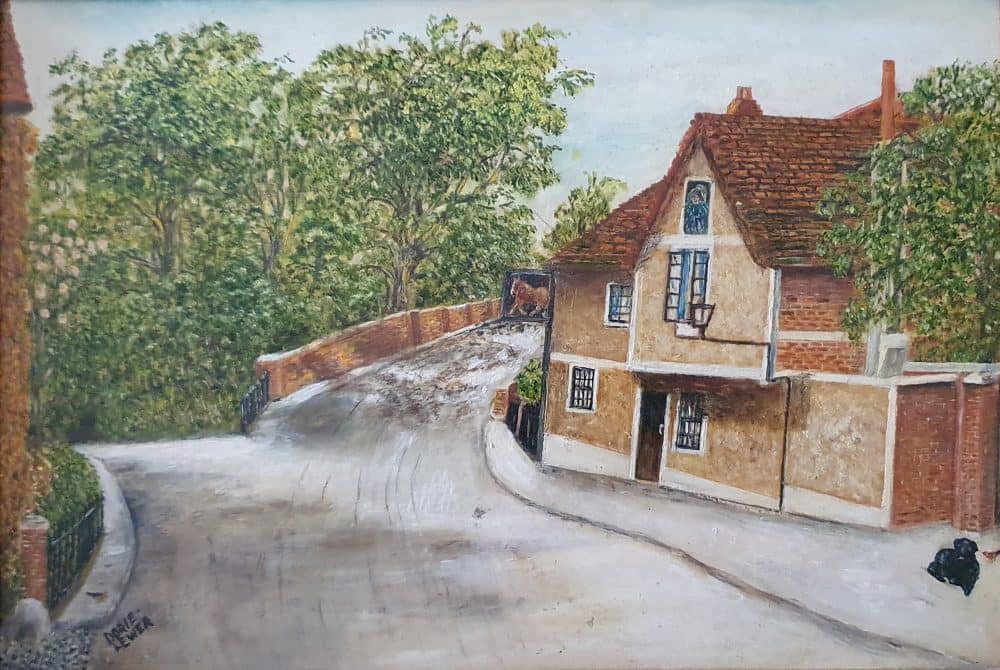 On 5th February 1782, several ‘noblemen, gentleman, clergy and freeholders’ of Surrey brought a petition for repair of Surrey’s bridges to the House of Commons. The bridges in question were at Cobham and Leatherhead, crossing the River Mole, and at Godalming crossing the River Wey.

Cobham and Godalming bridges were private property and kept in repair at the expense of ‘particular persons by reason of the tenure of their estates’, whereas Leatherhead Bridge was repaired by the parishes of Leatherhead and Fetcham. All the bridges were described as ‘narrow and incommodious for carriages and passengers (whereby much mischief has been done)’.

Not only were they precarious to cross, but the were barred shut, only to be unlocked when it was not possible to ford the rivers and no law existed which could compel them to be opened at any other time.

Both Leatherhead and Godalming bridges lay on the main route between London and Portsmouth, where a substantial part of England’s navy lay.

The harbour at Portsmouth has in all probability been an important trading post for centuries, possibly long before the Romans built their fort at what is now Portchester, c. 275AD. They named it ‘Portus Adurni’, and when Saxon pirates stepped up their attacks, they went on to build more defences along the coast which became known as ‘The Forts of the Saxon Shore’.

Portsmouth was a strategic point of defence to repel attack by Danes and Normans, and later the French and Spanish fleets. By the 18th century, the naval dockyard was substantial and growing ever more important. By 1774, the Royal Navy employed 17,731 men, but this had increased to 107,446 in 1783. The rate of growth was phenomenal, with over fifty new ships being added in just one year. The dockyard was enlarged in 1780, and by 1782 the fleet had increased to 600, from the 396 vessels in 1777.

When the gentlemen of Surrey brought their petition in 1782, the American Revolutionary War was still in progress, so it is only to be expected that they considered communication between London and Portsmouth to be of national importance. Having sub-standard bridges which were often barred to traffic meant the route was unsafe and dangerous.

Therefore, the petitioners called for the three bridges to be made ‘County Bridges’, that they should be remade, widened, and kept in good repair. As well as maintenance, the county should ensure that they should be free and open at all times to the public.

The House referred the matter to the consideration of a committee, to be reported back to the house by Sir Fletcher Norton. Things seemingly happened rather efficiently in those days, for the committee was ordered to convene the following day at 9 o’clock in the morning in the Speaker’s Chamber.

On 22nd February, Mr Norton brought the matter back to the House, having received the committee’s report.

William Hammond had explained that he had known Cobham Bridge for 20 years and it was so narrow that two carriages could not pass each other. During the day it was locked by a bar, which was taken down at night, but there was no toll that he knew of. One of the members said he had met with ‘great difficulty’ crossing the river when the bar was up, and another that water had entered his chaise as he was passing the ford. Yet another said he had nearly drowned. It seemed to be the consensus of the neighbourhood that the bridge should be opened, for it ‘is at present the most dangerous place in the County.’

John Smith produced a Record of Conviction from a trial at the assizes, which proved the bridge was private property and liable to be shut up, the owners not obliged to open it either by day or night except during time of floods.

Joseph Pickstone confirmed that one half belonged to Thomas Page, Esquire, and the other to Reverend Dr Richard Palmer and Thomas Hurst, Esquire. All parties had consented not only to give the bridge to the County, but to offer four hundred pounds and the old materials of the bridge, together with the right to dig brick earth and sand on their property for the rebuilding of the bridge.

Moving on to Godalming, Mr Hammond again testified that it was a narrow bridge and always locked up except in time of floods. It lay on the great road from London to Portsmouth, and was the property of Miss Molyneux, who repaired it ‘by tenure of her estate.’

Several members said they had voluntarily given money to cross the river via the bridge but that no official toll was demanded. They also stated that to anyone not familiar with that part of the river, crossing via the ford was particularly dangerous and that numerous accidents had indeed occurred.

William Man Godschall, Esquire, confirmed that Miss Molyneux consented to give up her right to the bridge, and like the owners at Cobham, offered the same liberty to dig earth and sand on her property to rebuild it.

David May described Leatherhead Bridge as very narrow with a parapet wall so low he had seen sheep jump over it. He had heard of many accidents involving persons crossing via the bridge, but that he did not think there was a toll. There was a bar up at both ends of the bridge – one end was in Leatherhead Parish and the other in Fetcham, and the bridge was the property of both parishes jointly. The bar was only removed when the water was too high to ford, at which time the churchwardens give instructions for it to be removed.

In Leatherhead Parish, a piece of land was let for eighteen shillings which was used for repairs, and Mr May had heard there was a similar piece of land in Fetcham. However, in Fetcham, a ‘rate’ had been issued for repairs the previous year. Added to that, several sums of money were paid yearly by carriages passing the bridge, and for those who paid the bars were removed. The Portsmouth and Guildford Coaches, for example, paid 2 guineas per year, as did the Land Frigate from Portsmouth. However, a Mr Clayton only paid five shillings per year for the use of the bridge. Mr May had not heard that there was a rate in Leatherhead for repairs.

Thomas Withall, churchwarden at Fetcham, confirmed that they had a rate of ‘Three Halfpence in the Pound’ about two years previously to pay for repairs. He also said he had seen many accidents, especially with horses going over the parapet and that about two years before, the Portsmouth Coach had overturned near the entrance to the bridge which was ‘very dangerous’.

When asked about land in the parish, he confirmed he knew of the ‘tradition’, but that he had asked all the oldest folk who lived thereabouts, and no one knew anything about it.

Several other members agreed that the parapet wall was very low and that few people venture to ride across. However, the water is always so high that it floods carriages which cross via the ford and stay even the slightest bit from the track.

Aaron Wickham, churchwarden at Leatherhead, reported that at a recent vestry meeting, it was agreed the parish should give up the bridge, but not the land, which was currently in the occupation of Mr Clair, at eighteen shillings per year.

George Gwilt, a surveyor, gave the following report as to the state of the bridges:

Cobham: 143 Feet long, and from 12’ 4” to 14’ 11” wide in the clear carriageway. A very ruinous bridge, inconvenient for carriages as two cannot pass without danger.

Godalming: 95 Feet long, and from 10’ 1” to 11’ 2” wide. A parapet wall on each side about 3’ high. The arches and piers, as well as the parapet are much bulged out. Also, very dangerous and inconvenient, two carriages cannot pass.

Leatherhead: 244 Feet long, and from 8’ 9” to 9’ 6” wide. The bridge is so narrow, and the parapet wall so low being about 3’ in height, that it is dangerous for one carriage to pass. The arches as well as the parapet walls are in a very ruinous condition, but that the piers are not proposed to be taken down.

Mr Gwilt gave an estimate of the expenses.

Cobham was to be rebuilt with brick and stone copings at an estimated cost of £1,500. It would be 22’ wide in the clear, and the parapet walls were to be 4’ 6”, which, with the stone copings, would be near 5’ high. He estimated that the old materials would be worth very little.

Godalming was proposed to be rebuilt the same as Cobham and taking into consideration the old materials which could be salvaged, the cost was estimated at £1,150.

He had not taken into account the sum offered by the current proprietors, nor the materials which could be resourced from their lands.

Leatherhead was only to be widened and repaired to the same specifications as the other two bridges, at a cost of £1,642.

Mr Pickstone stated that a county rate of Three Pence in the Pound, would produce the sum of £4,020.

As a result of the petition, the three Surrey bridges were rebuilt, enlarged, and transferred to the County.